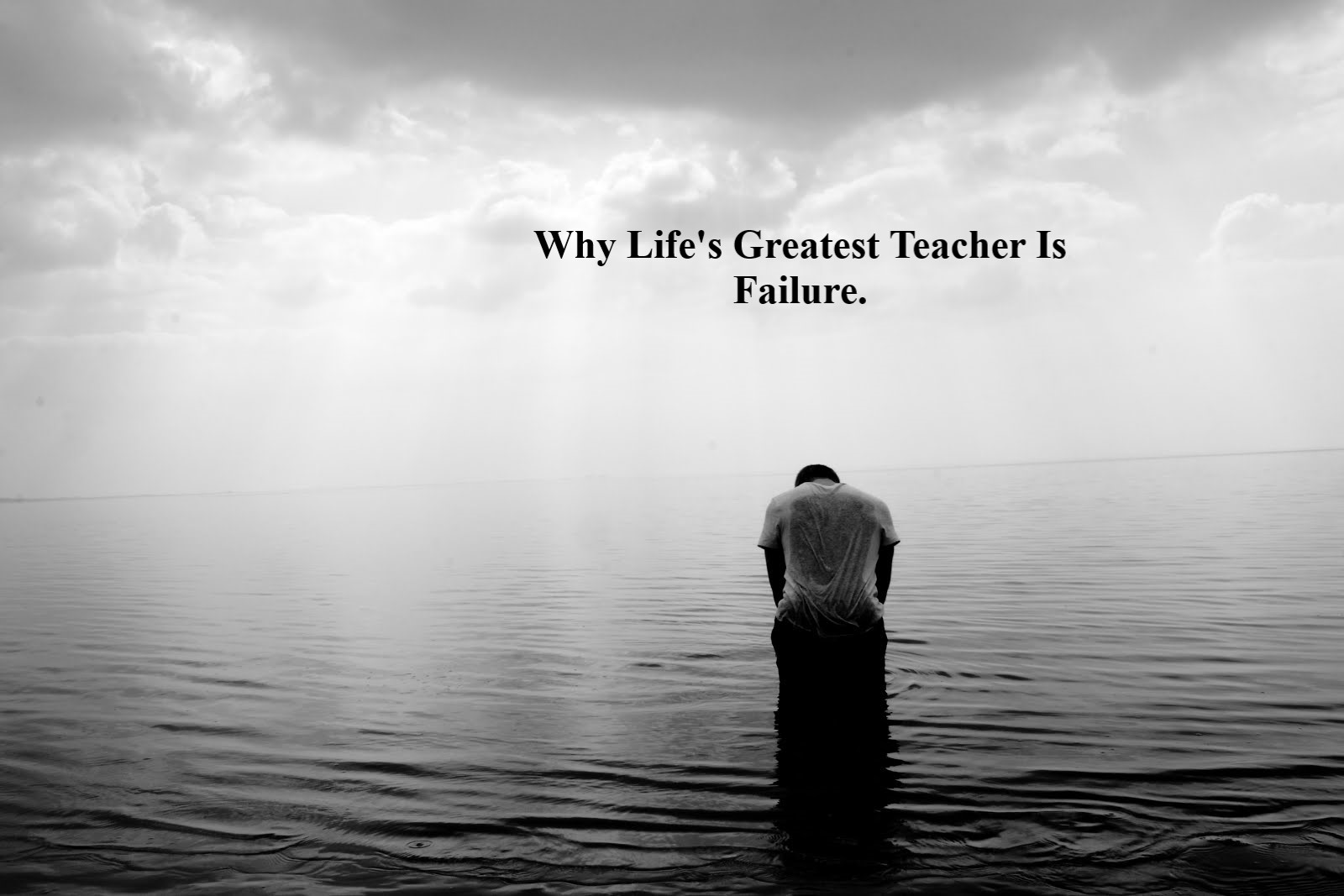 Why Life’s Greatest Teacher Is Failure. Failure is part of life. We all know that, but we don’t like it, this negative connotation that this word leaves on us. This aura of failure. But it’s only a question of how you look at it. Because if you look at failure from an etymological point of view, you find that it has nothing to do with failure at all. Instead, it means “to break into pieces (i.e. logs)”. So when we fail, something breaks into pieces, giving us the chance to put it back together again.

Just like day and night, failure is a part of life. Through trial and error and repeated attempts, we can improve. We can, however, occasionally get so paralyzed by our fear of failure that we choose not to even attempt the necessary actions towards the steps to success.

Others attempt fresh starts but fall short because they overestimate their own potential and fail to honestly evaluate their own capabilities.

“Failure is the mother of success. There is wisdom to be gained from the lessons of failure. Failure makes people wiser in dealing with life’s difficulties and obstacles. Those who are not defeated by failures will eventually succeed in life.”  – Dr T.P.Chia

Why Life’s Greatest Teacher Is Failure. Are you currently being criticized because you have not achieved your goals within the given timeframe?

Have you been working towards a certain goal for several months and, in the end, did not achieve it? Perhaps even your big dream has burst? When things go wrong, you are likely to experience emotions such as disappointment, frustration, and anger.

Accept such setbacks with gratitude, and tell yourself that you’re excited to keep moving forward and overcoming them. You will achieve success in no time!

“Failure is a great teacher, and I think when you make mistakes and you recover from them and you treat them as valuable learning experiences, then you’ve got something to share.“ – Steve Harvey

After all, we don’t fail in life for the sake of failing. But because we want to get better. Because we are aware that our first solution is not (yet) the best. That there is no such thing as THE solution anyway, but always just one that is a bit better. For example, one that is better suited to new conditions and insights.

The difficult thing is that we have to give up ideas, even destroy them. And not just any ideas, but ours. Our own or those of our team. Ideas that we ourselves are enthusiastic about, but that may leave us stuck in the “comfort bubble”. Which, if we don’t rethink, will lead to us going to market with a solution that we haven’t checked to see if it really fits the customer’s expectations and needs.

Every one of us wants to be successful in what we do. Many people have the difficulty of wanting success but not failure; they want one but not the other.

Always keep in mind that you won’t succeed if you work without making mistakes. Because failing is what initially makes success possible. Just recall how you first learnt to walk when you were a little child: Before you could even move, you had fallen a thousand times.

Now for the crucial information: Before you could walk, you fell a thousand times. Did you give up then? No! Because you couldn’t and you simply didn’t care that you had failed. You also didn’t care how others thought about it. You just kept trying until you were good enough to run. This example can be applied to any other situation in life.

Why Life’s Greatest Teacher Is Failure. Did your project fail? So be happy about your recent failure – it is a sign of your personal growth. Analyze Your Mistakes: What mistake did you make that prevented you from reaching your goal? We always like to blame ourselves for not being where we want to be or not having what we want to have. As a rule, you are responsible for your own actions.

Just give the word Failure a new meaning

It is not failure per se that stops us from trying things so many times until they work. It is our attitude. Most people just give up too soon. You try something once and if it doesn’t work, you let it go.

We just have to be willing to see the gain of our setbacks and take advantage of them. All you have to do is give new meaning to the word failure.

You are not failing, you are learning! Even if this sound a little too harsh, see your failures as a teacher and not an undertaker.

Failure does not mean giving up but only delaying. See it as a small, temporary diversion that you have to take in addition.– and this diversion will be worth it!

Most people see their failures and setbacks as a dead end, although they are actually a fast lane. Only your attitude decides where your failure leads you: “To success or failure.“

In conclusion, Failure is one of the most important teachers in life, because it forces us to learn and grow. By experiencing failure, we can learn how to overcome our mistakes and become successful. Life is full of challenges, but it can be viewed either positively or negatively depending on your perspective.

If you are paralyzed by fear when you fail, then you are giving failure the power to win over your life. If you view failure as a helpful teacher who can help you learn and grow, then you will be empowered to face and overcome difficulty. The best response is obvious – keep a positive attitude when things don’t go as planned. This will have a drastic effect on both your professional and personal life.

“There Are No Limits To What You Can Accomplish, Except The Limits You Place On Your Own Thinking.”