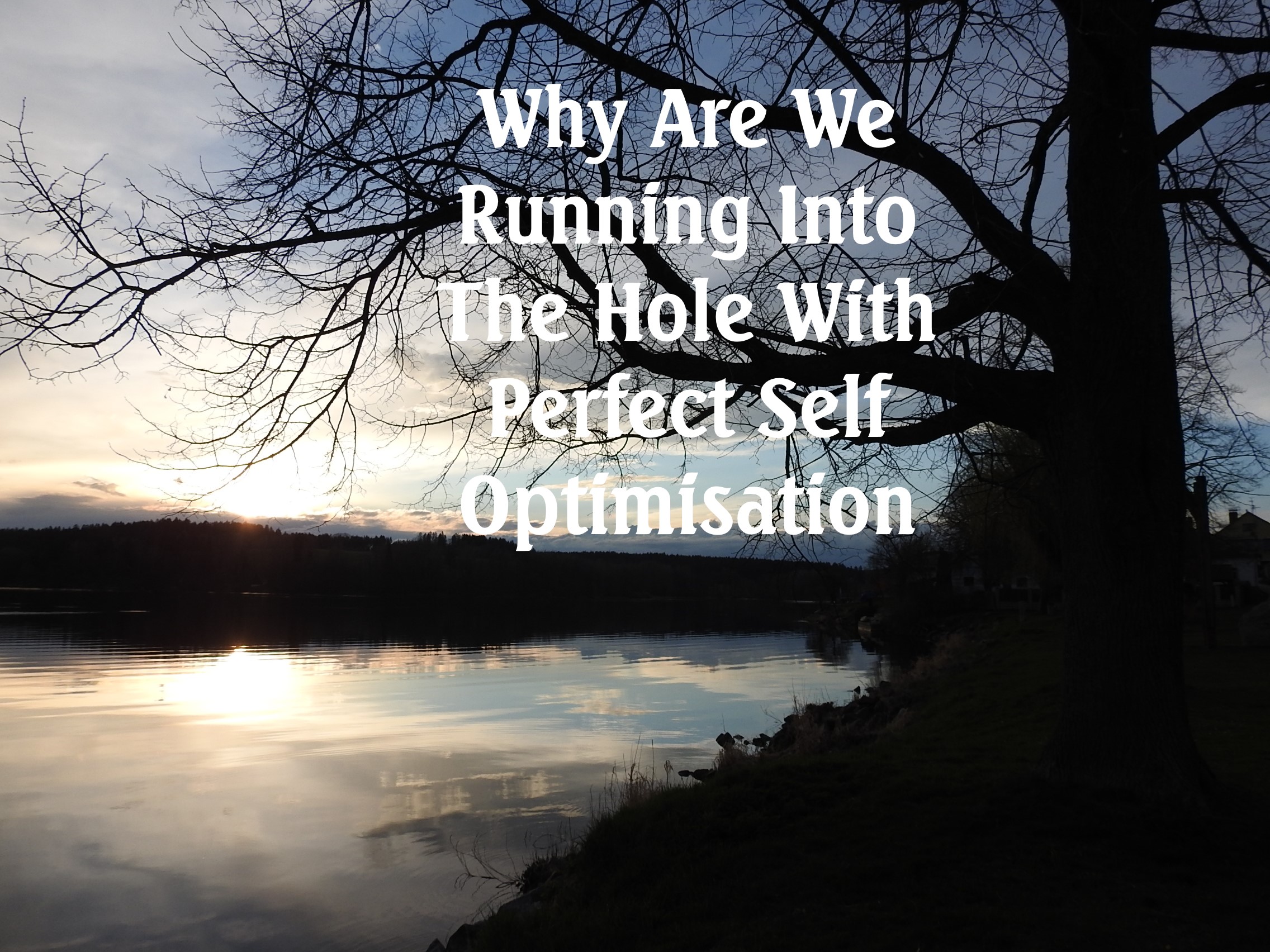 Why are we running into the hole with perfect self-optimisation. More beautiful, slimmer, smarter – that’s what many people want when it comes to their own self. Few people are aware that we are quite strict and hard on ourselves.

Statements like “if you want to be happy all the time, you have to change often” What else, do you sometimes think?

One can also feel overwhelmed by all these demands. On closer reflection, Confucius is not saying that only the external circumstances are meant. Rather, on closer examination, it becomes clear that it is also about the inner attitude. Before something can change on the outside, it must already have happened on the inside. That is quite difficult in everyday life. Also because we usually make very high demands on ourselves.

So Why Are We Running Into The Hole With Perfect Self-Optimisation?

If the ambitious plan does not work out, we have to admit to ourselves at the end: We have failed! Instead of being lenient with ourselves in the current exceptional situation, the reins are tightened even more internally, if not the whip is brought out.

Yet things like cooking, baking, sewing, online yoga or meditation seem within reach, especially during the forced “Stay home” phase. If activities like meeting friends, going to the gym or running quick errands are cancelled anyway, why not just use the “won time” and improve yourself further?

Happiness is not God’s gift.

I think luck and overnight success are entirely possible – but only after years of hard work.

Of course, we have all been “lucky” at one time or another, but even more often I hear:

Oh, if only I had been as lucky as he/her.

The alternative? Decide on something, then commit to it and do it.

It’s actually quite easy to attract happiness with these few tips:

Go the extra mile: Those who are lucky have often just done a little more than everyone else. Whether it’s actually getting the task done or staying in the office a little longer.

Take care of yourself: successful people set themselves up to maximize their potential. Simply staying in the office longer is not enough. You also have to have the power to do something reasonable during that time, and you can’t neglect your other areas of life. This includes topping up the tanks regularly, getting enough exercise, getting enough sleep, eating healthy, finding a good balance, taking breaks and not forgetting your spiritual side.

Be earlier than everyone else: Do not complete your tasks within the deadline, but well before the deadline. Always be early. Allow opportunities space and give them time to occur.

Always prepare: Without preparation, you’re wasting your time. Never go to an appointment unprepared and roughly plan your day ahead.

Set the bar a little higher: don’t overextend yourself, but challenge yourself. Or: Throw yourself out of your comfort zone.

Successful people don’t look for shortcuts and hope for luck, they do the work.

Do we really need to get better or are we just not enough already?

Nice idea. But if you think about it, you realise that this thought construct is on shaky ground. Because in reality, we have enough tasks on our to-do list even during the crisis.

Even before Corona, our everyday life was crammed with activities and to-dos from morning to night. Instead of clinging rigidly to to-do lists and fixed structures, it is now important to be flexible and show a talent for improvisation. The isolation has by no means made the tasks disappear into thin air. They have only shifted: Parents have to work and look after their children at the same time, Drumming lessons or sports now come online to their own four walls. One thing is missing even more than before Corona: calmness and composure towards ourselves!

Accepting criticism and learning to deal with it.

We can only handle criticism well if we feel safe! And when do we feel safe? When we do not take criticism personally. This is only possible if we have stable self-esteem and positive self-regard.

The lower our self-esteem, the more criticism hurts. But, as the saying goes. The tone makes the music. And so the words the critic uses also have an influence on how we react to his criticism.

It is possible to learn how to criticize in such a way that the criticized person can accept it better. And that is important. Because there is always someone who finds fault with you – no matter how good you are. Being able to deal calmly with criticism and rejection is an important skill for our mental well-being, for professional success and for social relationships.

Insight as a way to recognise the inner critic

Why Are We Running Into The Hole With Perfect Self-Optimisation?. We can focus on discovering our own serenity. Instead of exposing oneself to the constraints of self-optimisation, we can rather do what one really wants instead.

The core idea is to let go of what makes you unhappy, to get off the wheel of self-optimisation, it is necessary to look inwards. Instead of following a trend and thus often the masses, it can be helpful to ask oneself instead: Do I really want this or do I really want something completely different? So Why Are We Running Into The Hole With Perfect Self-Optimisation.

Almost all tips deal with the self-perception of one’s own self. Not simply going along with the flow and distinguishing oneself from others is part of the definition of the self.

This may seem a little unusual and egotistical to many of you at first. However, if you really want to be happy, you first have to recognise yourself and your own needs

The path to happiness and serenity begins with the first step.

Self-optimisation is the work on things like our body or the professional position we hold. In other words, everything can be compared to other people.

The concept of the art of living, on the other hand, deals with the individual relationship to one’s own inner self. “Values such as character, education or humour count here.

If both areas are part of every human being. It becomes difficult when the area of self-optimisation gets out of hand and becomes a delusion.

When the inner relationship is lost and one only cares about the representation on the outside, “then all that falls away that cannot be calculated, cannot be depicted and cannot be compared.” And that is really a problem, because the meaning that we can give to our lives and at the same time extract from them lies within.

Gratitude as a path to serenity is the solution that lies in getting rid of the self-imposed worldview and questioning one’s own attitude. For example, is one’s worth really defined purely by one’s looks and do we all really have to get better and better first in order to be happy? Do we really have to work hard to earn our own happiness?

At first glance, the way out of the merry-go-round of self-optimisation sounds simple: “To get back to ourselves, it is necessary to return to our inner world,” von Schirach explains. “Only from there can we experience ourselves, align ourselves, correct ourselves.”

Practical tips like the gratitude ritual help. A happiness diary helps to direct one’s gaze daily to things that one otherwise takes for granted. This makes you happier and has a positive effect on how you feel. And thinking about whether you are satisfied with your own behaviour in the evening before going to bed and focusing on your own wishes instead of paying attention to other people is feasible for everyone.

According to the philosopher, the quality of one’s life cannot be determined by material things but is defined by what makes each one of us tick.

In conclusion, how happy you are with your life has to do with yourself and your own ideas. Like every situation, the Corona crisis also makes you analyse your own life more closely and evaluate it from a new perspective.

By practising more serenity towards life, the crisis offers you the chance to go your own way with “more for less”. And thus, contrary to all trends towards external self-optimisation, to live a life that means happiness for you as an individual.

“You have to learn the rules of the game. And then you have to play better than anyone else.”