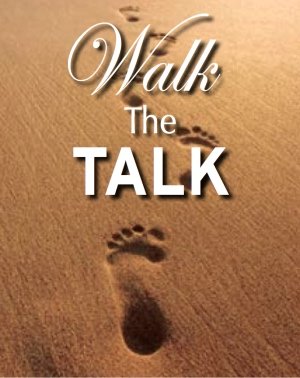 Walk Your Talk, One Step at a Time. Imperfections are part of life. I think it’s sad that some people feel that because being perfectly consistent with your values is impossible, that there is no point trying to debug the inconsistencies.

Walk Your Talk, One Step at a Time. Some self-improvement cynicism is the result of demanding the impossible, expecting perfection instead of progress.

Blogging has helped me close that gap by forcing me to walk my talk. I’m far from perfect. Like everyone, I make mistakes and often fail to live up to the things I consider important.

But writing has made it easier to stay consistent with those values instead of falling into excuses. My goal has been to notice gaps between my philosophy of life and my behaviors. I’m certainly nowhere near perfection, but even in just a few years of deliberately pursuing this strategy, I’ve made improvements.

Here are a few of the inconsistencies I’ve debugged over the past few years:

I point out these changes because none were instantaneous. Even after I had decided my beliefs on an issue, it took work to change my behaviors. The moment I declared productivity important to myself, I was still a slob. It took a few years of effort to reach the point I’m at today.

From an outside perspective, however, nobody sees that effort. I still get comments from readers that assume I was somehow born productive, early-rising or health-conscious. They don’t see the failed attempts I had in implementing everything am doing today, the days I slept right through my alarm or the failed day trials I went through before exercising the how to empower myself.

I need to take some of the blame for this, because I generally only write about my self-improvement efforts after the fact. Since self-improvement involves so many missteps and dead-ends, I don’t usually find it useful to write about something until I’ve made significant progress in it myself. You only have to look at the current ups and downs of my life to see why I don’t share too much advice on that yet.

Unlike a computer program, your software can never have zero-defects. Instead, try to think of self-improvement as trying to reach 98% bug-free. You will inevitably fail to meet your values some of the time, but those errors won’t matter too much in the long run.

In order to effectively debug your inconsistencies, you need the right tools. There are many different strategies to debug, but I’d like to share a few tools that were “Wow!” moments for myself. These tools were the difference between using a scalpel and a blunt club for my own debugging:

I’m still finding new tools, but the fact that this list is small shows that self-improvement doesn’t need to be overly complicated. One good tool, if practiced, can debug a large range of problems.

Finally, Walk Your Talk, One Step at a Time. Nobody can be perfect. But there is still immense value you can get from debugging those inconsistencies. Making the gap between your Walk and your Talk a little bit smaller.

“The Only Way To Do Great Work Is To Love What You Do. If You Haven’t Found It Yet, Keep Looking. Don’t Settle.”