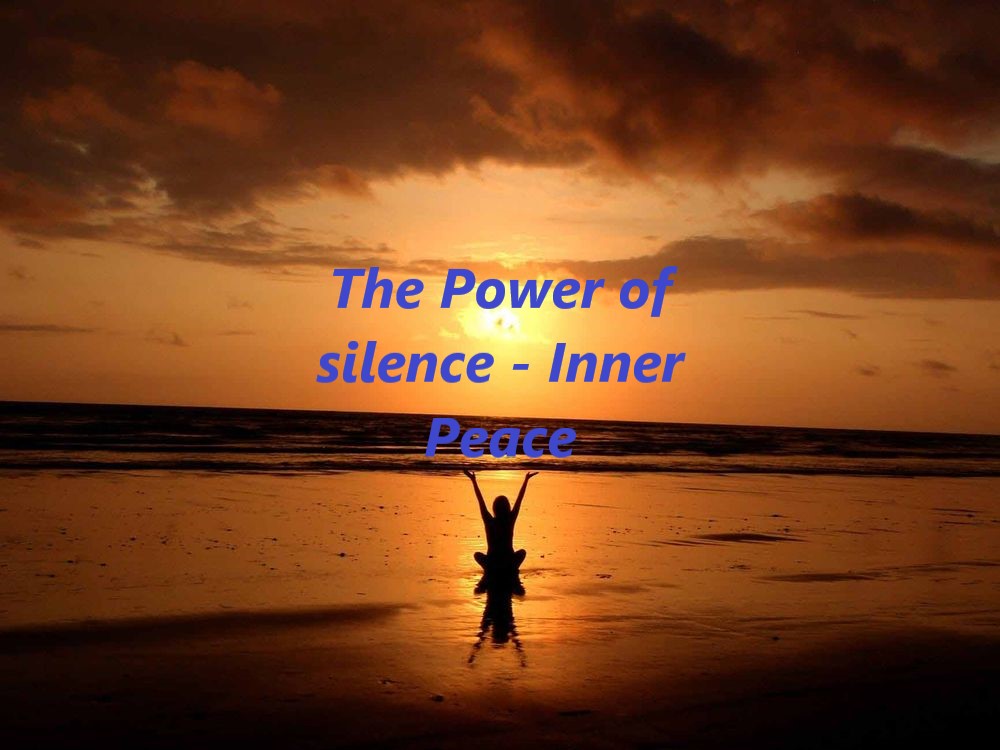 The Power of silence – Inner Peace. Many people are searching for it, but real silence has become rare in an environment that has become so stimulating. Yet the experiences we have with it can be existential.

It’s quite difficult to persevere – silence itself! Be that as it may, silence is worth the effort. Since we don’t for even a moment must be truly tranquil to encounter and appreciate quiet minutes.

On the trail of a phenomenon that has fascinated people since time immemorial. Inner peace is the stepping stone to one acquiring the much-needed wisdom and love in life.

“Being quiet does not mean passivity. It means being more tolerant, understanding, and focused.”- Remez Sasson.

The Power of silence – Inner peace. Silence is hardly to be found in everyday life. One thing is certain: silence is more than the “absence of any noise,” as it is often defined. It is almost an attitude in times when an almost constant noise level dominates everyday life. Yet, genuine silence has become interesting, and when it happens, it rapidly prompts bothering.

Even in everyday life, true silence is hard to find. Unlike the eyes, the ears cannot be closed. And so the noise of the environment is tried to be drowned out with counter-noises and many entrench themselves behind the music that booms out of their headphones.

The phenomenon of silence has always preoccupied man. It played an important role, for example, among the Stylites, the column saints, in the fourth and fifth centuries – they spent their lives in the capital of a column for reasons of asceticism. It has also been creatively explored by contemporary artists and many others.

The attainment of silence means a struggle and asceticism. Yes, it takes courage to free oneself from all that weighs down our lives, which love nothing so much as appearances, effortless accessibility, and the outer shell of things.

The chatterer who lets himself be carried away outwardly by the need to say everything can only be far from God and incapable of any deep spiritual activity. In contrast, the quiet man is a free man. The chains of the world have no power over him.

In the welter of occupied and empty words, silence seems to be a sign of weakness. In the modern world, the silent person is seen as one who does not know how to defend himself. He is an “inferior man” to the so-called strong man who crushes and drowns the other with his torrent of words.

The silent person is perceived as superfluous. This is the deep reason for the terrible crimes or for the contempt and hatred of modernity against the silent beings who are the unborn children, the sick, or the dying.

These people are wonderful prophets of silence. Together with them, I am not afraid to affirm that the priests of modernity, who have declared a kind of war on silence, have lost the battle.

For we can remain silent in the midst of the greatest confusion, the most shameful unrest, in the midst of the crashing and screaming of these infernal machines that invite activism and snatch us away from any transcendent dimension and any interiority.

What does it mean to find and feel “inner peace”?

You probably don’t realize the meaning of inner peace until you’ve lost it. If you can’t find peace even on the weekend, your thoughts are constantly circling around the same thing and an inner emptiness is spreading, it’s time to change something.

Those who have found inner peace remain centered even in stormy times. Instead of thinking about what all went wrong yesterday and what could go wrong tomorrow, it’s better to relax in the here and now.

That doesn’t mean you shouldn’t make plans or think. But rather that constant worrying saps your strength. Use your mind when there is a problem to solve. And enjoy the feeling of being alive when your mind is not needed.

Of course, this is easier said than done. Very few people are born with an unshakable penchant for calm and serenity. But you can find inner peace if you set out to find it. Just start where you are right now. Here and now.

There are many ways to find peace of mind and inner peace and to let go. You can better assess which way is the right one if you know your status quo.

In conclusion, Figuring out how to be silent powers you to gather your considerations, train your psyche, and assists you with concluding how you need to continue into the day. It can bring inward harmony and make you a superior audience.