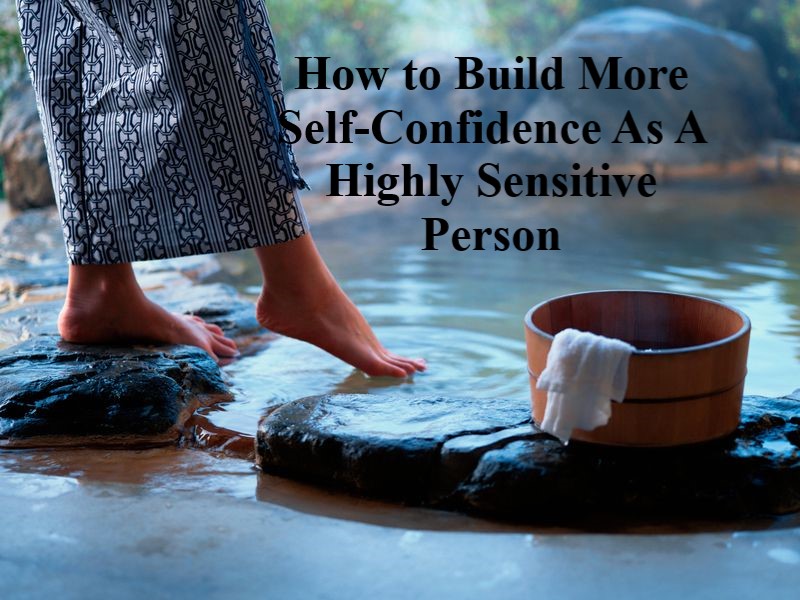 How to Build More Self-Confidence As A Highly Sensitive Person. Do you think of yourself as lacking self-confidence or perhaps consider yourself shy? Then it could be that you are one of many people who are considered highly sensitive.

Unfortunately, in our society, this term sounds like a “swear” word. Especially for men.

In this article, you will learn how to deal with yourself better and, above all, thereby build your self-confidence.

How to Build More Self-Confidence As A Highly Sensitive Person. Let’s use this structure for better understanding:

According to the University of South Florida: “Self-confidence is an attitude about your skills and abilities. It means you accept and trust yourself and have a sense of control in your life. You know your strengths and weakness well, and have a positive view of yourself. You set realistic expectations and goals, communicate assertively, and can handle criticism.”

How to Build More Self-Confidence As A Highly Sensitive Person. Self-confidence is basically your essence. You are aware of yourself or not. However, since you have survived so far because you have responded to the needs of your body, and slept, eaten, and treated your illnesses, I assume that you are self-aware.

Therefore, you can’t say that you don’t have self-awareness. This is already good news for some. Because it is on low self-esteem that many people base their self-worth.

That means they don’t feel like themselves around strangers or in unfamiliar situations, or they’re overwhelmed or want to be more quick-witted and feel wimpy as a result.

As if they have little energy or as if they have to think about something forever and can’t make up their mind. They feel less worthy than others around them who somehow seem to have more energy.

And right here is the good news again.

You’re super self-aware in this situation, your feelings, and your current situation, the problem is just your interpretation of those things.

WHAT IS HIGH SENSITIVITY?

Highly sensitive people have the claim to make the world more Just, more human, more loving. According to science, 15-20% of all people belong to this circle of the “thin-skinned”.

Because while high sensitivity can be a blessing for those affected and for humanity in general, most of those affected tend to perceive it as a curse.

A highly sensitive person perceives his environment much more precisely and stronger than others. He knows when his partner is annoyed about something long before he notices it himself. He prefers to stay away from loud noises and crowds of people, as these cause him physical stress, but he is very sensitive when it comes to his fellow human beings and has a pronounced sense of justice.

These people have mostly learned in their development to deny their sensitive side and to adapt to the fast and noisy western life and especially to their fellow men.

How to Build More Self-Confidence As A Highly Sensitive Person

“DON’T BE SO SENSITIVE!”

A sentence that highly sensitive people know only too well. On the one hand, because they have often heard it from the outside, but also because they recite it to themselves like a mantra.

As a person with heightened sensitivity, such a sentence attacks their own being as if they were being judged for their skin color, size, or gender.

At this point, an inner struggle begins for them against their own perception and thus themselves.

In the first stage of this struggle, those affected learn that it is not okay to feel so deeply and finely. They conclude that their way of perceiving others and themselves so immensely is bad and is perceived as disturbing by the outside world (especially by caregivers such as parents and friends) and punished with rejection.

For highly sensitive people, positive reinforcement is as important as the air they breathe.

Because of the increased perception of all emotions, even the negative ones, it is important for these people to have a loving home.

How to Build More Self-Confidence As A Highly Sensitive Person. Because highly sensitive people perceive the feelings of others as their own. In addition, it is in the nature of humans to perceive negative emotions more strongly than positive ones.

The highly sensitive person, therefore, has to fight with negativity on a daily basis and is then punished for feeling it with rejection.

Therefore, he tries to adapt and to be as one wants him to be or how he is better received. He denies his perception.

Here begins the second stage of the struggle. The highly sensitive person has learned to adapt to the world view and the opinion of others, while he has forgotten to stand up for himself. However, this gives him a superficial feeling of belonging and security.

He tries to reinforce this supposed security again and again by gathering information. This can be at work. For example, when he acts uncertainly and slowly in the easiest tasks or asks how the simplest actions are done.

This, however, causes those around him to think he is incompetent and stupid.

The highly sensitive person no longer has his own point of view. Should he have a good day to express his own opinion on a matter and to enforce it? He is seen by his fellow man rather as a fool who is once again bitchy or irritable.

Unfortunately, the highly sensitive take this perception of others for granted and then actually think of themselves as irritable jerks who still can’t manage to get along in the free world.

“YOU’RE A WUSS!” – EITHER MASCULINE OR SENSITIVE

For men, in particular, the ability to sense things accurately is a burden. This is because emotions are usually associated with the feminine. While highly sensitive men do not feel masculine at this point.

Yet emotional intelligence is more important than ever in today’s world.

While in the 1920s pure craftsmanship counted and toughness was rewarded, today we are fortunately in a time that is increasingly nourished by human interaction.

The leadership of employees and fellow human beings has to be emotional nowadays.

A big plus for every highly sensitive person. How positive is it for a company if the boss knows and serves the needs of his staff?

How beneficial will it be for a salesperson who senses his customer and can really make him happier with the appropriate product?

Now you might think that as a highly sensitive person I simply need to cultivate more mindfulness so that I learn to listen to myself better.

But this is a mistake in thinking. Because if someone with heightened sentience from now on spends some time within himself and deeply senses everything in his life, he will come to the following conclusions:

“My partner doesn’t really take me into consideration at all, and I don’t feel that we will be permanently happy.”

“I keep to myself because the world is too stressful and people are too superficial.”

Many highly sensitive people then trade their lives for loneliness and poverty, while talking themselves into their new circumstances and not noticing how this negatively impacts their situation and actual thin-skinnedness.

In this situation, they lack the positive reinforcement already mentioned above from people who love them, as well as challenges that the mind needs to grow, or not degrade.

I made a resolution for myself in my job during primitive conversations with my colleagues: “Hurry up, work.”

It caused me too much mental stress to want to be glib or to be well received by them. So I decided to listen to my intuition and only talk to them longer when I felt that everything that was about to follow had a certain depth or high information content for me.

Suddenly, there was an end to primitive humor, small talk, and, above all, the feeling of not fitting in and being wrong.

Instead, I felt strong. Because from now on it was my own decision if and with whom I wanted to chat longer.

I built my own boundary and respected it.

Boundaries are great! You certainly feel more comfortable on your own property than on someone else’s, don’t you?

That’s exactly how you have to think of your mind.

If you want to fit in and deny yourself, it’s like having a barbecue on someone else’s property. Or going to a techno party even though you like rock music.

RESPECT YOUR BOUNDARIES AND MOVE WITHIN THEM

So if someone invites you to a mental techno party, check the party to see if you can feel comfortable being yourself at it.

If it’s not, you stay on your own property and have your own party.

Because it’s setting yourself apart from others that will lead to you becoming more aware (of yourself).

Stand up for yourself. Other people will recognize that in you. And when that is given, you will be able to use the blessing of high sensitivity for yourself and become an Emotional Leader. Exactly what the world desperately needs at this time.

My final words for you is that:

“dream wider and experience deeper horizons and bliss. When you’re sensitive, you’re alive in every sense of this word in this wildly beautiful world. Sensitivity is your strength. Keep soaking in the light and spreading it to others.”~ Victoria Erickson

“You must be the change you wish to see in the world.”